The mini-reel is a reel for SMD components on cut tape. It is compatible with the standard 7" reels, only smaller. Its capacity is therefore also much smaller: about 1/4th of what a 7" reel can hold. Novelties of the mini-reel design (apart from its smaller size) are: a slot with a scale for estimating the quantity left on the reel, a rim at the inside of the outer edge that avoids “spontaneous” unrolling of the tape from the reel, and sprocket pins to anchor the end of the tape (all these are optional and configurable).

Ready-to-print files for three common tape widths are in the Downloads section. The design file, in OpenSCAP is also included.

Most importantly, the design follows the standard for reels for the essential dimensions (EIA-481). The mini-reels that were once on the market had a diameter of 100mm, and this design inherits that size.

That said, the mini-reel is designed in OpenSCAD and all dimensions can be configured (with the OpenSCAD “Customizer”). You could even use this design file to generate standard 7" reels.

The suggested (and preset) dimensions of the mini-reel are: outer diameter = 100mm (nearly 4"), hub diameter = 50mm, spindle diameter = 13mm (the spindle is also called the “arbour”). There are presets for tape widths of 8mm, 12mm and 16mm. In the default settings, the “wall thickness” of the flanges is 1mm, and the flanges are separated by the tape width plus 0.4mm tolerance. The total thickness of a mini-reel is therefore the tape width plus 2.4mm (but again, all these values can be changed).

The mini-reel is printed in two parts, which are then snapped together (no glue is needed). One side is almost closed; this is the side on which you would put a label with the part information. The other side has three holes, to make it easier to stick the tail of the cut tape into one of the three slots. These three slots have varying widths, and this is because cut tape has varying thicknesses. The narrowest slot that the tape still fits in, typically holds the tape best.

The side for the label also optionally has a slot that runs from the hub to the edge, with a scale next to it. Its purpose is to allow you to estimate the amount of components left on the reel —more on this in the next section.

Another optional feature is the addition of “sprocket pins” in the slots where the end of the tape is inserted (see the picture below). These pins fit into the sprocket holes of the cut tape. The goal is that these avoid the tape of sliding out too easily due to the stiffness of the paper tape and its tendency of unrolling. Yet, when the tape is at its end and the mini-reel is fully unrolled, that last bit of tape should slide out of the slot with ease. 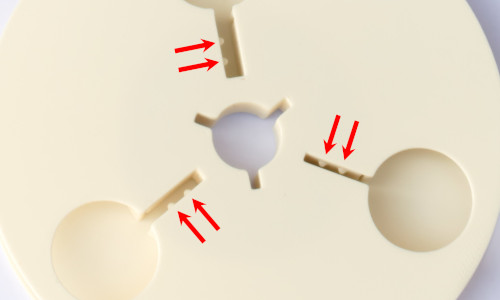 Estimating the quantity left on a reel

The most accurate estimate is when using a Reel Quantity Calculator. For the mini-reel, set the hub diameter to 50 in this calculator, and the “material thickness” to 0 (zero). You can accurately measure the “roll width” (the R-value in the calculator) with calipers through the slot with the scale and you need to measure the thickness of the tape with calipers as well. Note that the estimate is only accurate if the tape is tightly wound on the reel.

For a rough estimate, you do not need calipers or a calculator. The scale of the mini-reel has 10 markings, each of which represents a 10% step in quantity of a full reel. Near the edge, the markings are more closely spaced than near the hub, to compensate for the smaller diameter near the hub.

So the position on the scale is the percentage of the quantity of a full reel. Next question: how many components fit on a full mini-reel. This depends on the thickness of the tape. The graph below gives the full-reel quantities for mini-reels with the standard design parameters, as in the downloads. Each curve in the graph pertains to the pitch with which the components are spaced in the tape.

To avoid that you need to measure the tape thickess every time that you take an estimate of the remaining quantity on the reel, I recommend that you write the “full-reel quantity” on the label on the reel. Then, if you look at a mini-reel and estimate from the scale that it is roughly at its 60% marking, and the quantity of a full mini-reel was calculated as 1300, a quick calculation will result in an estimated 780 components remaining.

Instead of the above graph, you can also use the Reel Quantity Calculator for the initial calculation for the full-reel quantity, of course.

At the turn of the century, when SMD components were not as ubiquitous as they are today, you could get parts in a quantity of 1000 on a mini-reel. It made sense, especially for prototyping and for the smaller manufacturing services: you could often not re-use left-over parts of one project in another, because SMD parts were still special. So for a small series, you would rather buy mini-reels instead of standard 7" reels (that hold 4000 or 5000 parts).

This changed as SMD parts became more and more common. Sales of 7" reels increased and those of mini-reels decreased, up to the point that part manufacturers decided that mini-reels were no longer commercially viable. Mini-reels all but disappeared from the market.

While mini-reels may not be commercially viable, there is still a use-case for them. The fact that several distributors offer a “re-reeling service” proves that there is still a market for smaller quantities —but yet on a reel.

When it comes to storage, small reels take less space than large ones. That, in a nutshell, is my rationale for the mini-reel. For a small company, with a small stockroom, but still a large selection of different components, all those barely filled 7" reels are a waste of space. The scale for estimating the component quantity left on the reel is a nice bonus.

Now that I mentioned storage: we also made a design for a tray for the mini-reels. Like the mini-reels, the design is in OpenSCAP, and all dimensions are configurable with the “customizer” of OpenSCAD.

The ready-to-print STL files have a length of 190mm and separated in two “compartments&rdquo. There is one STL file with an open end (and one where the end is closed). Both are generated from the same OpenSCAD file. Our goal was to have a tray of 380mm long, to fit on the shelves in our storage. But this is too big for our printer (Prusa i3 MK3S), which is why we glue a standard tray and an open-ended tray together, to form a longer tray.

I recommend that the parts are printed on a smooth surface (so not a "textured" steel sheet). You will want the top side of the reel to be smooth for the label to stick well.

Supports or a brim are not needed.

When starting my design, I was aware of a similar mini-reel design on Thingiverse. After the fact, I also stumbled upon another, even smaller design, also on Thingiverse. Neither design appears to be parameterizable; they are both for 8mm "paper-tape" style cut tape. I wanted a configurable design, both to support several tape widths (at least 8mm and 12mm tape), and to support various tape thicknesses (embossed carrier tape is usually thicker than paper carrier tape).